<SEMIN>
Ah, in less than a year I will finally be Doctor!
Should I just chill? Or make more new stuff?
.....
Let's have a bit more fun with macrocycles.
Well, cyanostar was a surprise. Pretty high yields in a one pot reaction.
Maybe the non-symmetric building block was the trick!
What other chemicals are easy to decorate in a non-symmetric fashion?
......
CARBAZOLES!
<SEMIN>
Look! There is a 1.8 D molecular dipole. FACING THE WRONG WAY!
And what? The hydrogen atoms are even less electropositive than a benzene?
It definitely meets the criteria for "how to NOT make anion receptors".
But still... should I make it? Maybe it will surprise me. Let's just do it.
What should the linkers be?
​Cyanostilbenes?
<SEMIN>
​​OK, I'll listen to you this time, Spartan. I agree, it does look ugly.
Now, try triazoles.
<SEMIN>
​Nice, flat and symmetric!
Time for synthesis.

<SEMIN>
​Easy undergraduate chemistry, just one column chromatography, large scale reactions. Not bad.
But will it cyclize under click conditions?

<SEMIN>
IT WORKED!
I shall name you Tricarb. Because you have three carbazoles. :D
Tricarb! Can you grab me some anions?
Wow, with three triazole CH donors and six lousy carbazole CH donors, it can still bind anions strongly. Only a magnitude weaker than cyanostars.
Do we even need polarized CH groups?
Is simply aligning any CH groups in a circle enough to bind anions?
<EPILOGUE>
Few months later... 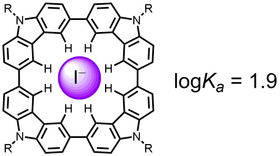 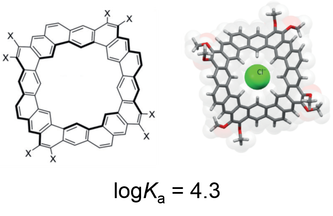 Wow, looks like any aromatic CH can do the job now.
LSU